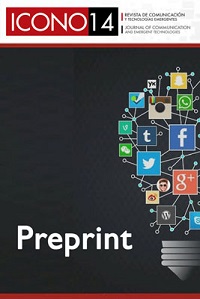 The process of globalisation and its clear communicative, cultural and political effects are greatly affecting two relatively new concepts in academic research, specifically Political Communication and Political Culture. The relationship between these concepts is increasingly interdependent as the tools and languages of Political Communication strongly influence the formation of the New Political Culture, and in turn, citizen activity through digital communication tools is conditioning the generation of content and the creation of discourse which take shape in the form of Political Communication.
We believe that to understand the reasons for this relationship it is necessary to establish, firstly, the characteristics of the New Political Culture, and secondly, the way in which the possibilities offered by technology transform the generation and transmission of Political Communication. Possibly the newest aspect of this relationship is that it has a two-way nature, altering the classical roles of the communication process that clearly distinguishes transmitters and receivers. This new aspect constitutes global evidence and is felt in a very similar way in all western representative democracies.
This work endeavours to describe and analyse this emerging scenario which has taken shape as another of the transformations which are occurring in advanced societies, and to identify some trends which, in all cases, are subject to the accelerated change of our time.