A media system based on a small number of sources, extremely hierarchical and mainly targeting a passive mass audience, has evolved towards a context where the number of media has exponentially multiplied, audiences are highly fragmented and increasingly active, with almost endless options for news consumption. This new scenario is described as a hybrid media system, where old and new media co-exist.

Nevertheless, the research carried out so far shows that the number of citizens who produce news or contents related to public affairs is reduced. Audiences continue to grant journalists and media the role of primary gatekeepers on the news agenda. However, they also demand to be involved and interact with the content produced by the media and journalists. The spaces for user participation created by online media and social networking platforms constitute public spaces in which citizens can share information, express their opinions and react to the opinions of others.

In a hybrid media system scenario, audiences have become active, and their voice is now more powerful. This book tries to analyze this phenomenon from multiple perspectives. 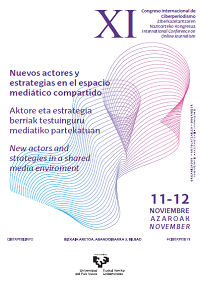 This book explores the innovative ways in which the media are involving audiences in the creation and redistribution of content in general and news content in particular in the digital era. It examines journalistic innovation from four perspectives: how digital media outlets are engaging today’s active audiences in the processes of news production and dissemination, the ways in which Spanish-based digital publications are using social media to reach wider audiences, the extent to which voters rely on social media rather than traditional media for information, and the roles traditional media, digital media, and social media in the Basque Country play during election campaigns.

Active audiences and journalism. Analysis of the quality and regulation of the user generated contents

Even if journalism has always been in continuous transition, nowadays it seems to be going through a time of especial uncertainty and changes, similar to that experienced when the Web and online media emerged. Together with constant updating, abundance of information and innovation in the formats, genres and devices for consumption, nowadays participatory journalism represents one of the main challenges of journalism and the mass media.

The Web’s evolution from 1.0 to 2.0 has given rise to a more complex scenario, which is marked by greater audience presence in the communicative process. This citizens’ direct participation in news production has even led to the replacement of the traditional mainstream media as primary sources of information. Among other consequences, it has been necessary to recycle journalists’ skills in Web 2.0 communication activity.

Since audiences, citizens-users or clients -according to the case- are more and more involved, active and social, it has been also crucial to develop expert professional profiles. That is, those changes have introduced new patterns of communication and increased new forms of creative expression, journalism and participation.

This book approaches this adaptation by analyzing different experiences and models of citizen participation and interactive journalists, besides paying special attention to the debate on the quality of user-generated content and the value of the relation between the media and audiences to strengthen the traditional democratizing value of mediated communication.

The progressive evolution of the online media over the last 20 years, from 1995 to the present, occupies a special place in the professional and academic field, and is now heading towards an unknown horizon filled with uncertainty for the profession.

The work carried out by the Infotendencias group, made up of thirty-two teachers and researchers from thirteen Spanish universities, consisted precisely in narrating that evolution. They carried out that work from the origins of digital journalism up to the present moment in which we are immersed, a key moment of reconfiguration and reinvention of the mass media. The Infotendencias group has been succeeded by another, centered on active audiences, which aims to continue the work of that research group.

The origin of this book can be found in the research activity of its authors that stretches back for a decade and a half; this has resulted in a certain consolidation of both a stable academic critical mass and, above all, a collaborative network that is increasingly advancing into the international sphere.